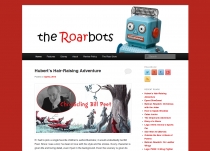 (Big Apple Circus is currently playing at the Dulles Town Center in Dulles, VA, through Sunday, October 5. Buy tickets here. The show then moves back to New York for the holiday season, through January.)

It's a bit more "fun" for little kids than Cirque du Soleil might be (and certainly more affordable), and it avoids the large animal acts that often plague larger, more traditional circuses. (There are no elephants, lions, or tigers.)

The conceit here is fairly simple: the Big Apple Circus presents a one-ring circus underneath a big top with an old-school ringmaster between acts. It's almost enough to transport you back to the Dust Bowl. Almost. The concept of a metamorphosis (the name of the show this season) is only tangentially incorporated into the show. Some of the costume designs and ringmaster "set-up" monologues relate to butterflies, but that's about it. Don't expect an elaborate theme that percolates through every aspect of the show (a la Cirque du Soleil).

Still, that's not to say the show is a bad production. Far from it. There are a lot of great acts.

Before I go much further, though, I have to say one thing: This woman. Tatevik Seyranyan. She almost singlehandedly held the show together. She was involved in almost every other act, never made a mistake, and--for us--was the highlight of the night. Whereas other performers sometimes faltered, missed a cue, or actually fell, Tatevik didn't miss a beat. Her bio claims that she's a new member of the Big Apple Circus, and I think the entire circus might have just improved by adding her.

An example? She was in this act. Look at these two women: Now look at this box. They're both inside of it! I've never seen anything like it. It was amazing and creepy at the same time. Don't get me wrong. Many of the other acts were good; there were just more flubs and mistakes than we're used to seeing in a show of this type. There were also some downright confusing acts. One woman blew bubbles. That's it. She just blew bubbles. There was no complicated bubble blowing involved; no bubbles within bubbles or anything. Just bubbles.

Another act involved animals running in circles for what seemed like an eternity. Two camels, two horses, and two goats. It was supposed to mimic a carousel, but they just kept running and running. My 5-year-old said, "They're just running in circles. There's no talent here." Ouch.

Speaking of animals, those that are involved in a few of the acts are mostly "farm animals," with the exception of the camels--dogs, horses, pigs, goats, and so on. I'm sure this will cause some people's heads to explode with cries of animal cruelty, but we found the acts to be harmless enough. After all, most of these animals are the type that would be worked much harder on a farm. All in all, at this price point, the show is quite good (especially since there are plenty of discount ticket options available online). The big top atmosphere is charming, and the kids loved it. Most of the acts were very entertaining, and the show still managed to offer up something new for those of us who've seen our fair share of similar performances (i.e., squeezing the two contortionists into that small box).

Recommended for kids of all ages. At our performance, nearly everyone left happy, and we heard a lot of praise among the audience. (Disclosure: We were guests of Big Apple Circus for this performance. All opinions remain our own.)