Elmo Makes Music was very colorful, bright, energetic, and entertaining.  My favorite thing was that they pretty much had all the monsters come out on stage at some point during the show.  My daughter is very good at pointing out who is missing and she said all but two monsters (I don't even know who they are) were there.  My four year old spent most of the time trying to figure out if the monsters were real and if they were just humans in costumes, how come she couldn't see their zippers?!  The costumes were beautiful.  My two year was excited to recognize the characters and she danced in her seat awhile, but she quickly cared more about what I brought for lunch than the show. 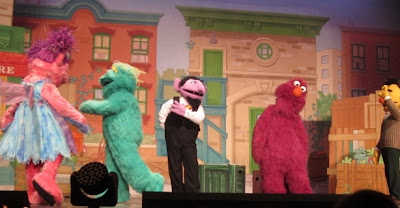 At intermission, the staff sold large Elmo balloons (for $10 each!) and at first my husband and I were aggravated because now we would have to deal with big balloons in our way, but fortunately, someone came on the loud speaker and asked that people keep their balloons under their seats just for that reason!  All of the toys and food were incredibly expensive, so just plan a budget ahead of time. 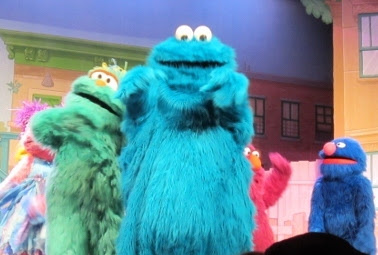 I think the best age group for a show like this might be for four, five, and six year olds.  However, that doesn't mean others won't enjoy it.  They sang songs that were recognizable to everyone and even had some humor in it.  For a special day out with the family, it was well worth it.  Both my daughters came home and wanted us to read them all of our Sesame Street books right away.  They had fun telling Grandma today, "I saw Elmo and Big Bird and Oscar and Bear and Grover and Telly and Rosita and Abby and Bert and Ernie and Dorothy and Mr. Noodle and The Count and...!"